On the night of 14 November 1940 John Piper was in Northampton. In the morning he received a ‘phone call from the War Artists’ Advisory Commission telling him to go immediately to Coventry which had been pounded overnight in a massive bombing raid. When he arrived it was to a scene of total devastation. He stood in the still smoking ruins of the cathedral and began drawing. Then, in the upstairs room of a solicitor’s office which had remarkably remained intact opposite the cathedral, he began to paint on a couple of pieces of plywood. Done quickly, the resulting two paintings have extraordinary emotional force. Within a fortnight they had been turned into postcards by the Ministry of Information and sold in their thousands for the war effort. What he produced was a record not so much of what Coventry Cathedral and the rest of bombed Britain really looked like, but the emotional impact of how people felt about these newly made ruins. The paintings are modest in size and hardly melodramatic, but they made an impact. If they now look conservative, at the time their style was regarded as uncomfortably modern and distorted. 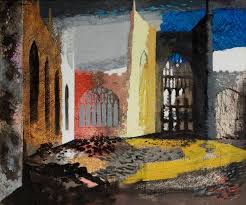 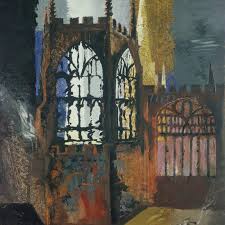 Up until the Coventry paintings Piper had  been primarily viewed as an abstract artist. This view had been reinforced by his close association with Ben Nicholson and the Seven and Five Society. However between 1926 and 1940 he had supplemented his income by reviewing art, books and plays and began to make a reputation by illustrating articles for the Architectural Review with his own drawings. It was this which had led to an approach from the War Artists’ Commission.

He was engaged in April 1940 to do a series studies of ARP Control Rooms. It wasn’t something that he enjoyed and after completing only two pictures he asked to be transferred to something else, preferably war transport. Instead he was given the task of recording bombed churches, which is why he found himself in Northampton on that November night, and why he was so hastily transferred to Coventry. (There is some interesting, and protracted, correspondence between Piper and the Commission regarding his expenses claim for hiring a car to take him to Coventry.) In addition to the sketches and paintings that he did of the cathedral he took many photographs which demonstrate the feeling of devastation. (Piper was an avid photographer. The Tate alone holds over 6,000 taken between 1930 and 1980, mostly architectural details of churches.)  His work recording bombed churches took him the length and breadth of the country: St. Mary Le Port, Bristol; Christ Church, Newgate Street, London; All Saints, Bath; St. Benedict’s, Norwich among others.

It wasn’t until June 1944 that he finally achieved the position of official war artist to the Ministry for War Transport (on a salary of £270), by which time the war was approaching its end.

After the war finally ended Piper did not return to abstraction.  The war work, particularly the recording of the ruined churches, had  set him on a more-or-less figurative direction for the rest of his life. In the 1950s this was almost wholly representational but, from the 60s onwards developed into a looser style that verges on abstract pulled into shape by careful line work. The subject matter is more suggestive of place than representative and frequently only identifiable through the title of the work.

Even as a child Piper had been interested in churches. While at school in Epsom he produced guidebooks illustrating his bicycle trips around Surrey. In the 1930’s that experience led him to take on the editorship of the Shell Guides to the English counties, which in turn led to his collaboration with John Betjeman which started with the Shell Guide to Oxfordshire in 1938.

Together they took to ‘church crawling’ and between them they campaigned tirelessly to prevent friendless churches from falling into neglect and ruin. Nowadays it is  Betjeman who gets most of the credit for that work , but he acknowledged the contribution of Piper, telling him that “You have saved much of England by your pictures of architecture and landscape. What is more you have increased our vision. Things look like pictures by you and look better for having been seen by you.”

Perhaps inevitably, and undoubtedly through Betjeman’s influence, Piper began to take an increasing interest in all aspects of the churches they catalogued. Not just the architecture but the stained glass, the vestments, the liturgy and the hymns. These in turn led to close collaboration with the architect Basil Spence, the stained glass maker Patrick Reyntiens, the priest Walter Hussey and the composer Benjamin Britten. As a result Piper is now recognised as the foremost ecclesiastical artist of the twentieth century.

It was Spence who asked Piper to produce the stained glass for the rebuilt Coventry Cathedral. The Baptistery window is huge, 81 ft. high and  60 ft wide, consisting of 195 lights, one of the largest pieces of stained glass in the world.  Piper was forced to design within its vast dominant grid of concrete mullions so opted for an abstract scheme. A central burst of predominantly yellow and white glass is surrounded by darker hues – more blues to the top, greens underneath and reds to the edges. The overall effect is one of a sun radiating in the sky within a landscape. The intention was to produce something which is symbolic of the essential value of baptism itself, which lifts the newly baptised from the powers of darkness and incorporates them into the brilliant glory of Christ. 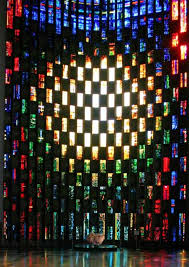 The Coventry windows were produced by Reyntiens to Piper’s designs. It was not the first time that they had collaborated. The pair first worked together in 1954 when Piper took his designs for memorial windows at Oundle College to the Nuttgens stained glass works in High Wycombe. Nuttgens assigned Reyntiens to the job. It was to be a creative partnership which lasted over thirty years. Nothing was too big or small for the pair. They designed tiny little windows for parish churches to the vast displays at Coventry and Liverpool cathedrals. Some are abstract, some representational, some traditional in their technique, others ,such as those at All Saints, Clifton, at the cutting edge, incorporating coloured resin and fibreglass. The Coventry Baptistery window is undoubtedly the best known, but the east window at St. John the Baptist in Lichfield is the most staggeringly beautiful. As Patrick Reyntiens has expressed it: “ Working with John Piper was like seeing a craft whose ambitions up till then had been akin to those of chamber music being transformed by full-blooded orchestration. We were conscious of bringing stained-glass into the modern movement of painting and design and in so doing bringing the eye of the painter to the medium.”

The stained glass work quickly led to spin-offs, mostly due to the efforts of the Revd. Walter Hussey. Hussey was one of those inspired clergymen who believe that God can be served through art. In 1940 he was the vicar of St. Matthew, Northampton. Piper painted the church. As the war ended Hussey commissioned Henry Moore to carve a madonna and child for the church and Graham Sutherland to paint a crucifixion. In 1955 he became the Dean of Chichester cathedral. Piper designed a cope for the new Dean to wear. It was uncompromisingly modern and signalled to the congregation the route that Hussey wished to take his cathedral. He went on to commission work from Marc Chagall, Graham Sutherland, Ceri Richards, William Walton, Leonard Bernstein and, of course, John Piper. Piper’s main contribution was a vast tapestry behind the altar, but he also designed a complete set of vestments. His work at Chichester led to further tapestries at Hereford cathedral and vestments for both Coventry and St. Pauls. Between the mid 50s and his death in 1992 he produced textile hangings, tapestries, vestments, ceramics and stained glass for an incredible number of churches.

While it would not be true to say that John Piper is not recognised as a great artist, it probably is true to say that he is out of fashion. He is clearly in the line of British artists which can be traced back to Blake and Samuel Palmer and can be glimpsed in the work of his contemporaries such as Edward Bowden and Eric Revillious. Their significance has been overshadowed by the rise of post-war american art which distorted the history of art in the twentieth century but which is, thankfully, now beginning to be revised. Having said that, the very fact that the fickle spotlight of fashion moved away from Piper means that his work now looks strangely ageless, and all the better for that.